Funeral Customs Around the World

It can be fascinating to look at different funeral customs around the world and to discover some of the ways people deal with death in their communities. Funerals and burials can get very strange almost to the point of being funny.

However most people don’t want to think about it, but the truth is that all of us will have to face death.

None of us can escape the sorrow that death brings. It is amazing to believe that in rural areas in Portugal for example, widows will wear black and continue to do so for the rest of their lives!

The Strange Custom of Covering Mirrors Muslims believe that a person’s life doesn’t end at death. They bury their dead as soon as possible after death, so that embalming is avoided as cremation is forbidden. Unlike the Japanese, where cremation is the norm,

Shiv’ah is a Jewish mourning practice where people change their behaviour as an expression of their bereavement. It is an old Jewish custom that where there is mourning, the mirrors are covered. When people sit shiva in the house of mourning, they are paying their respects to the deceased.

The Jewish people stop work and they reflect on the merits of the person who died. The mirror represents a concern for yourself instead of the deceased. The Jewish believe it is only fitting that the mirrors be covered up in the house of mourners.

In Japan, the religious beliefs of most of the people there are a blend of Buddhism and Shintoism. A huge percentage of funerals in Japan are organized according to Buddhism. The Japanese people don’t bury their dead, but cremate.

After death there is a ceremony known as ‘Water of the last moment’ where the lips of the deceased are moistened with a little bit of water. After death the household shrine is covered with white paper to keep out impure spirits.

A white lantern is placed outside the home to let people know that there has been a death in the household. It is custom to place some useful items in the casket such as a white kimono and 6 coins for the crossing of the Sanzu River which takes the deceased to the afterlife. 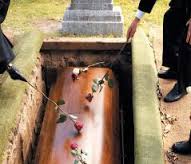 traditional cultural beliefs and customs with funeral practices and the afterlife. They believe the dead depart to a spirit world free of pain and suffering.

The tribe wait for a day or two before burial. The mourners then dress the body in fine clothes. The Lakota fear death and they sometimes burn the dwellings of the deceased. To help them on their journey to the spirit world, the Lakota take certain belongings with them to the grave. The funeral customs of the Lakota show respect and reverence for those who have passed.

A Fascination with Funeral Customs

Believe or or not there are many people who have a deep interest and fascination with the way people are buried. Many people find it intriguing visiting a cemetery and reading inscriptions on tombstones.

Each culture has different customs when it comes to burying their dead and there are always a number of reasons for certain practices, but all of them are done because of respect for the dead and to give them a decent send off to life beyond the grave.