There is no mandate in the Bible for a separate place for the burial of Jewish people. However, Abraham did acquire a private plot where he buried his wife, Sarah.

Judaism opposes cremation. And in fact, Jewish law, or Halachah, calls for the burial of Jews in the earth.

Cremating a body according to Jewish teachings destroys the body. Cremation makes the burial of Jewish people according to the correct rites impossible.  The Torah tells the Jews not to follow the practices of non-Jews.

They believe that cremating the dead is a ritual of pagan cultures. So for Jews, it is, therefore, a violation of this biblical prohibition. In Jewish law, the human body belongs to its Creator, and the body must go back to the Creator in its entirety, just as it was given. 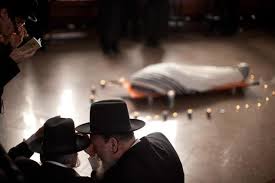 The responsibility for the burial of the deceased’s burial lies with the family. The family goes to great lengths to respect the wishes of the deceased.

Total respect for the sanctity of the human body is top of the agenda when it comes to preparing the deceased for burial.

The burial of Jewish people is scheduled for the earliest possible time after death. Jewish funerals take place in different locations, with some being exclusively graveside while others start at the synagogue before proceeding to the cemetery.

Ideally, burial should be on the same day as the passing. The deceased are buried in a simple casket which is biodegradable and with no nails. Usually, the most respected members of the community care for the dead. These members maintain the highest levels of respect and privacy throughout this process.

Burial of Jewish People – Simplicity is the Overriding Idea

According to Kabbalah, the soul doesn’t leave the body immediately after death but slowly decomposes so that the soul has time to depart the body. Throughout Jewish history, a traditional Jewish burial is seen as the highest priority. Burial is a plain wooden casket, with a white linen shroud covering the body.

Nearly all Jewish mortuaries sell shrouds in accordance with the attire worn by the High Priest in the Temple on Yom Kippur. For Jews, it is right that white linen garments be worn to meet the Maker.

Today Jewish people have plain white linen shrouds with no pockets for burial, since you can’t take anything with you. No items go into the casket as the Jews believe you come with nothing into this world, so you leave with nothing. Burial of Jewish people is, therefore, modest.

Burial of Jewish People – The Burial Itself

After the ritual funeral, the casket goes into the ground, and those attending the funeral fill the grave with soil. It is customary in some Jewish communities to form two lines facing each other through which the mourners pass. During this time the attendees recite the words in Jewish which mean ‘God console you with all who mourn in the midst of the Gates of Zion and Jerusalem.’

Once the burial of a Jewish person is over, everyone washes their hands as they leave the cemetery. Condolences then follow at the home of the mourners.

Design Headstone Online and Get Exactly What you Want for your Loved One →
← Non Christian Funerals for Hindu, Islamic and Jewish people
Copyright 2020 Funeral Cover Quotes