What Is the Difference Between a Coffin and a Casket

One thing is for sure. Coffin and Casket manufacturers are in constant demand, and they never have to worry about going out of business.

It does not matter if you choose a coffin or casket for your loved one’s burial. Manufacturers in South Africa can build a ‘container’ or burial box which is in keeping with approved standards.

South Africa has a diverse population. So coffin and casket manufacturers have to make everything from pauper coffins to luxury coffins or caskets. The latter are stained and upholstered and come with handles and different decorations. However, whether coffin or casket, they need to be waterproof.

Coffin and Casket – They Have the Same Purpose

Some people say there is no difference between a coffin and a casket – they both serve the same purpose. Most deceased people fit easily into a regular coffin or casket.

A coffin resembles the shape of a human being with six or eight sides. In other words they taper at the head and foot and are wider at the shoulders.

Caskets on the other hand are rectangular in shape. Usually they are constructed of better quality timbers and may have more detailed workmanship in them, but with customisation these days, nothing is set in stone. 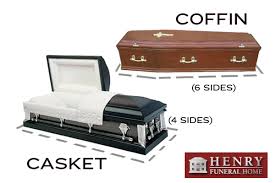 rector will gladly show you photographs of the different coffins and caskets available and you can even call on a funeral house to get ideas of whats on offer. Get funeral cover quotes to make sure your insurance will cover the full cost of a burial.

Many people look at a coffin or casket as a tribute to the deceased and they are therefore very selective when choosing one.

Just remember not to overspend just to have a luxurious burial box wouldn’t bring honour to the deceased person.

Coffins and caskets are not always luxurious and some cheap burial boxes and funeral products are for those who haven’t any funeral plans. Both a coffin and casket in South Africa have to conform to SABS standards.

Its all in the Shape

The term casket actually comes from the French word, ‘casse’, which simply refers to a box or chest. Some people prefer caskets. They think the word casket sounds less formal and cold when compared to the word coffin.

Does it Really Matter?

Casket or coffin? Does it really matter? With so many options out there, whether you’re concerned about the shape, the material or the size, the truth is when you’re in one, you won’t know.

To sign up for funeral cover, start by getting a quote here. Please complete and send the form on this page to request a quote