Traditional Funerals Around the World

In Western countries like the United States of America and Canada, traditional funerals consist of three parts. These usually include the visitation, then the funeral and then the burial service.

Other names for visitation regarding a funeral are the ‘viewing’ or the ‘wake‘. The deceased person usually lies in the coffin with the lid up. That is so mourners can come by and pay their last respects to the dead person.

The viewing will usually take place a few days before the funeral. Years back, the viewing would take place at the home of the deceased or a relative. 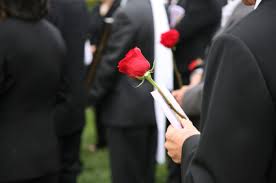 practice still continues in countries such as Scotland and Ireland. The body wears fine clothes. In modern times many people make suggestions as to how they would like to appear at their funeral.

Many wear clothes that they wore during their lifetime. Sometimes the body will wear jewellery or brooches and a watch. The family removes these afterwards if there is going to be a cremation.

Traditional Funerals – At the Funeral Service

At traditional funerals, often the family of the dead person will have a book for the funeral attendees to sign. That is just for record purposes. The family might display photographs of the deceased at the funeral. That is so that mourners can see the happier times of the dead individual.

Sometimes, during the wake and on the day of the funeral, there might be a video or DVD of the dead person’s life. The video shows wonderful memories and accomplishments. And the video is often accompanied by soothing music.

Sometimes the body of the deceased has damage incurred by accident, illness, trauma or deformity. Mourners may not be able to deal with the viewing of the body in the open casket in this state. Because of this, the family might well decide to close the coffin. However, there will be a formal photo on the casket that people can view.

Before the funeral, the family might have requested that those attending the funeral need not send flowers. Usually, the words will say ‘instead of flowers’.

At most traditional funerals the family give suggestions as to where people can rather pay a donation and help a certain cause rather than spend the money on flowers which will last just a few days.

If the deceased was a member or adherent of a church, the pastor would probably officiate at the service. The funeral service can take place at the church or the funeral home. It could also be a crematorium or a cemetery chapel.

The funeral runs according to what the family chooses. That may be a few days after the death of the family member. That allows family and friends to come from afar.

At traditional funerals, there will be a memorial service if a cremation is to follow. If the dead person is to be buried, usually after the funeral service, the mourners will move to the cemetery. There they will take part in the burial service.

At traditional funerals, family and friends may feel inclined to say something about the dead person. And there is usually an opportunity for this. Prayers, hymns, and eulogies from the family members will be sung and spoken.

A Relaxed gathering signifies the End of a particular Time

After this service, those who wish will proceed to the cemetery. Or maybe the crematorium if that what has been arranged. Traditional funerals always end with family and friends getting together for a tea or meal. An informal and relaxed setting and occasion is meant to help the family put their sorrows behind them. It gives them strength to venture into a new life without the presence of their loved one.

To get a personal funeral cover quote, please complete and send the form on this page