Fancy the idea of your body resting in a forest? There the falling leaves gently cover your body? Many people would. The idea of being in a coffin 6ft under is abhorrent. Not only that, burials in the modern world have become such elaborate affairs. Many people are longing to escape all the expensive fuss. They don’t like the idea of the unnatural embalming fluids, which are materials that never decompose. Also, they don’t like the expense around the after-party and what it takes to keep up with the Joneses. It all seems so horrifically wasteful. A method known as aquamation might be the answer. 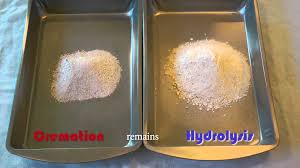 process became legal in New Hampshire in the US. But because of the opposition of religious lobby groups, banning followed. A Proposal to legalise it again was later rejected in 2013.

Aquamation International has been a finalist in the Australian Technologies competition. This is for their part in reducing the environmental damage caused by burials, and to some extent, traditional cremations. The idea is catching on, and there are plans to open many more Aquamation Centres throughout Australia. Installation can be in existing crematoriums or on other suitable properties. It will reduce the carbon footprint significantly, not releasing the toxic gases, which occurs during traditional cremation.

The beauty about Aquamation is that the costs surrounding it are similar to cremation. It also solves the issue of a shortage of burial plots. One of the other advantages with aquamation is that the process does not affect medical parts such as pacemakers and even titanium hip replacement parts. This saves the funeral director quite a bit of time and effort at having to remove these parts which would otherwise explode.

How Does Aquamation Work?

With aquamation, the body is gently placed in a stainless steel vessel where the blend of the right temperatures, flowing water and alkalinity are used to accelerate the natural course of tissue hydrolysis.

Operators add potassium to warm water and the same process that would happen to a body left to nature occurs. The only difference is that instead of the body taking six months to decompose, it now takes just a few hours. At the end of the process the body is ultimately dissolved in the water so that only the bones remain. The water which is a green-brownish colour contains sugars, salts, amino acids and peptides and is an excellent fertilizer for any plants. Grinding of the bones follows and these then go to the next of kin as ash.

Environmental concerns, lack of space as well as vandalism are becoming concerns for governments of countries the world over, and Aquamation is seen as a solution to these concerns as well.

There is growing support for Aquamation the world over, and for some time now the agricultural industry has found it to be the preferred method of disposal of diseased animal carcasses in Europe and the USA, especially where dangerous diseases such as Mad Cow’s Disease are prevalent.

The benefits of Aquamation is that you don’t get any of the toxic side effects as you do with cremations and burials. Does this idea appeal to you or are you waiting for something even less expensive and even more natural to emerge in the future?