Funeral directors in the 21st century are far more upbeat about funerals. Importantly, they think far beyond the usual expectations. And they make sure to comply fully with their customers’ demands, who are looking for carefree, modern, lighthearted funerals.

Funeral directors see a definite change in what the baby boomer generation are planning modern funerals. Mostly, the baby boomers do expect different things for their money for their funeral ceremony.

Certainly, the days of black-car processions are over for most people. Today people use horse carriages, Harley Davidson motorbikes and other unusual means to transport the body to the funeral service venue. Funeral directors can provide whatever music your like. Sure, hymns and psalms are always on the cards – but so is pop, jazz 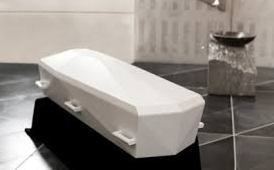 There is even a funeral home in the USA that advertises its funeral services as ‘we put the Fun in funerals’. So some funeral homes no longer advertise themselves as funeral homes but are called ‘celebration studios’ instead.

Funeral directors today re-look at their offerings to be sure that they can cater to the demands of those who want to celebrate. So planning modern funerals is a whole new ball game.

Funeral directors present customers with a variety of different themes and organise a funeral around these. These funerals are no longer the gloomy, sombre affairs of yesteryear. They are celebratory ‘afterlife parties’.

Funerals That Are an Exception to the Rule

Grieving families suggest colours and props for funeral catering in modern times. These things all reflect how the deceased lived. They introduce a host of things to brighten up the sombre image of what funerals have always been.

Today people perceive death differently around the world. Just look how they exhume the dead periodically in Madagascar so that they can be part of their ritual Famadihana. Some people regard these sort of practices as irreverent and disrespectful, but the truth remains that there are individuals who want them. And if funeral directors want to stay in business, they have to keep up with changing trends.

Most people have the sting taken out of death by pre-planning every detail. They’re comforted knowing that their funeral service will be something that reflects their unique life. Planning a modern funeral is all about tailoring it to match your personality. They can be as solemn or as raucous as you like – whatever it takes to make sure your funeral is an exception to the rule.

Funeral directors can tailor the details of a funeral service to match any personality. They say that one form of loneliness is to have a memory but no one with whom to share it. Sharing is a central part of modern funerals.

With today’s emphasis on fun, today’s funeral are lighter, more varied. The result is people expect funeral directors to have something exciting in store for them.