Paying Too Much for Funeral Cover?

You may think you are paying too much for funeral cover, and your anxieties about it may be justified.

How will you ever know if you are paying too much if you don’t compare your funeral cover with others? Many people don’t realise that once you have passed away, a simple but dignified funeral should suffice.

Perhaps you have lots of money, and the prices of products and services don’t matter to you. Then no one will blame you for giving your deceased family member a right royal send off.

However, maybe you are battling to make ends meet, however, having an extravagant funeral to keep up with the Joneses would be pure foolishness.

Paying too Much – be Informed So You Don’t Get Caught 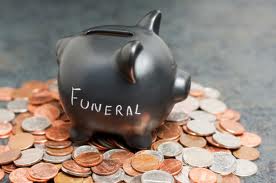 You should be planning a funeral according to how much you can afford to pay. And according to the services you require. Some things are lovely to have at the funeral, but they are not an ABSOLUTE necessity. You can get by without them.

In South Africa, we can’t complain because we have access to a host of affordable funeral policies. For instance, if Clicks ClubCard members between 18-65 are eligible for funeral cover at no cost. When you die, your family will have cash towards your funeral.  And your cover can be ten times the value of your average monthly Click purchases.

Get all the information you can. Study your province’s laws and know what they have to say about rules and regulations around coffins, cremation and embalming. As an informed customer, you can catch your funeral director out if they are trying to sell you expensive items you don’t need. Some people opt for a pre-paid funeral plan, paying in advance for a funeral.

Some people include in their will what they want their funeral to be like and then fail to take out a funeral policy that will pay for what they want. If they didn’t make such plans, there is no way that you have to follow these instructions. Everybody wants to adhere to the wishes of the deceased, but not if it means going into debt because of it.

Paying Too Much – What Costs can’t You Avoid?

When you start looking at funeral director services you will be paying for things such as storing the body till the day of the funeral, the coffin, the hearse, death certificate, the cemetery plot as well as funeral director fees. Remember that burials and cremation differ quite a bit in price, with cremation being a far more affordable choice.

Paying Too Much – Check Out Funeral Packages for Hidden Costs

Every aspect of the funeral is your decision, and you should never feel pressurised into spending more than you want to. A straightforward and meaningful funeral can be every bit as dignified as one which costs a lot more money. When you do your research, you will find that some funeral service providers will offer a funeral package price. Be careful, because as convenient as they may sound, they may have some elements you will have to pay for but which you don’t want or need.

Paying Too Much – The Secret to Affordable Funeral Cover

Always make sure you get quotes from REPUTABLE and LEGIT funeral service providers. They can offer you funeral costs which won’t break the bank. And they will be there for you in your darkest hour. The longstanding financial service provider, Old Mutual, for instance, is all about paying as little as R29 a month but where you get cover for you and your family.

To sign up for funeral cover, please complete and then “click to send” the form on this page